Home
Articles
Bowhunting and Electronics: Is it a fair fight?

Bowhunting and Electronics:
Is it a fair fight? 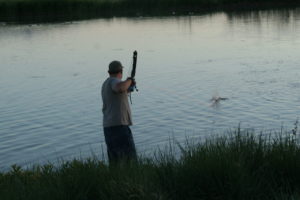 Go to the magazine section of your favorite bookstore or supermarket, and check out any periodical pertaining to the challenging sport of bowhunting. There is a good chance you will find an article discussing the pros and cons of technological advancements in bow and arrow design, material, and manufacture as well as in the myriad accessories offered to make bowhunting “easier”.

If the magazine caters to the majority of bowhunters, the article’s author will most likely extol the virtues of the latest and greatest in compound bow technology, such as a percentage of let-off, cam shape, cable material, riser material and shape, carbon arrows, fletching vanes, feet per second, etc.

Don’t forget the sure-fire bowhunting success gadgetry like electronic aiming devices, electronic rangefinders, bowstring release triggers, etc. On the other hand, if the periodical is devoted to the more traditional side of the sport; i.e., hunting with recurve bows, long bows, self-bows, Indian flat bows, wood arrows with feather fletching, then the opposing view will probably be proffered.

I tend to lean toward the more traditional bowhunting tackle; I shoot a Black Widow recurve and a Howard Hill longbow. I use a bow quiver on the recurve and a leather back quiver with the longbow. I prefer to hunt with home-made cedar arrows with feathers that I burn to size and shape and glue-on Zwickey or Wolverine broadheads.

I twist up my own bowstrings. I don’t use a sight (can’t judge distance that well, anyway), which forces me to get pretty close before I feel comfortable making an instinctive shot. I prefer wool to fleece (own both), plaid to camo (own both), hunting into the wind to cover scents. However, I am not what some technophiles would call an elitist. I have my old-fashioned streak, but I have no problem sharing a campfire or a tent with a fella and his high tech, “wheelie” bow.

I just believe that if a guy or gal decides to chase game with a bow, all that matters is that he or she practices with whichever type of equipment he/she prefers, learns his/her effective range, and doesn’t try to shoot beyond it.

You should also look into getting yourself some Trail Cameras so you can see what has been or what types of game are showing up in your hunting grounds. They’re many types to choose from such as Wireless and Wi-Fi which allow you to see what’s around in real-time.

So, why am I writing this article about technology versus tradition? Well, as a traditionalist when it comes to bow and arrow, I gotta’ tell you, when it comes to safety and survival, give me the high tech stuff anytime! There was a time when I figured all I needed was a topo map and my trusty compass; did fine with them for quite a few years. That’s probably because I am blessed with a pretty decent sense of direction and because I hunted in the same area for several years. BUT…..

About ten years ago, my buddy and I decided to check out an area in the Cascades of Washington with which we were not so familiar. As bowhunters often tend to do, we got out of the truck and immediately split up (two guys make three times the racket a single bowhunter makes). After entering the forest to the west of the road and walking a couple hundred yards, I found and followed a game trail southward in what I thought was a parallel with the logging road we drove in on.

I pussyfooted through the area for about three hours, covering probably only a couple of miles, and then I decided to head back to the truck in order to meet up with my buddy at the agreed-upon time. I still don’t know what possessed me, but instead of simply back-tracking the way I had come, I decided to head east toward the logging road with the intention of crossing it and hunting the other side of the road back to the truck. What I didn’t know was the trail I had been hunting did not parallel the road exactly; it was actually on about a 45-degree angle southwest to it.

Anyway, I slowly headed in the direction of the road expecting to reach it in a few hundred yards; I didn’t. So, I shrugged and climbed the next ridge – still no road. I trudged down to the valley and up the next ridge – still no road. Now I was a bit concerned; so, I opened my pack to get out my topo – not in there; not in my pockets. I had left it on the dashboard of my friend’s truck! I hate it when that happens! I broke out my compass. I was, actually, heading east…well, more like southeast, but where in the world was that darned road? Should I go back the way I had come?

By now I was even starting to doubt my compass and my sense of direction. I started to whistle and yell in hopes that my buddy or someone who knew where the heck he was would hear and come to guide me out of the forest. No response. After I calmed down a little, I decided to continue on the way I was going.

After another hour of climbing over downed trees and four or five more ridges, I finally found the road. I turned north on it, but I came to a fork I didn’t remember. Not knowing which way to turn at the fork, I just prayed that I was on the main road, turned around and walked the five miles back to camp. My friend showed up in camp about an hour later intending to get our two other friends to go looking for me. I was pretty embarrassed to say the least.

I swore that wasn’t going to happen to me again. Before the next bowhunting season my family and I moved to Colorado. My sweet wife also bought me a Garmin GPS (global positioning system) from Cabela’s for Christmas. And boy, did that come in handy a few years ago! I was hunting for the first time on the Uncompahgre Plateau in western Colorado.

It had been raining like crazy for much of the trip. While I was in the forest (very thick stands of aspen and spruce) a few miles from camp, it not only started raining again, it became socked in with fog. I got pretty nervous because I could barely see where I was going. Fortunately, in my pack was my GPS, into which I had entered a waypoint for our campsite the minute we arrived earlier that week. I was able to walk through thick woods, dense fog, and torrential rain directly to camp. Sure, I still keep a topo of any area I hunt in my pocket and the compass in my pack as backup, but will I ever venture into the woods again without my GPS? Not likely! It is as much a part of my survival gear as the first aid kit and fire starters in my pack.